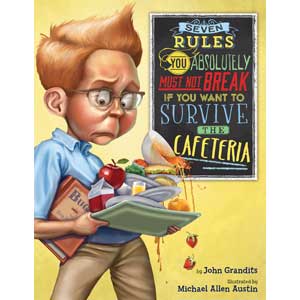 Kyle has always brought his own lunch to school. But today he’s going to buy it from the school cafeteria instead. He doesn’t think it will be any big deal. But his friend Ginny sure does. She says the food is terrible, plus there are rules that you must obey if you want to survive. Poor Kyle! Rules make him worried and scared, mostly because he usually breaks them. Now his stomach is doing flip-flops, and he hasn’t even had a bite to eat. Will the rules help or make things worse?

“The illustrations are particularly effective, artfully transforming various characters into insects in such a way that even the grossest (meat-eating water bugs!) become appealing.”
— Booklist